The poker career of Andrew Wilson reached a new level when the British pro topped 1,541 entries to win $785,800 at the 2022 WPT Seminole RRPO Main Event 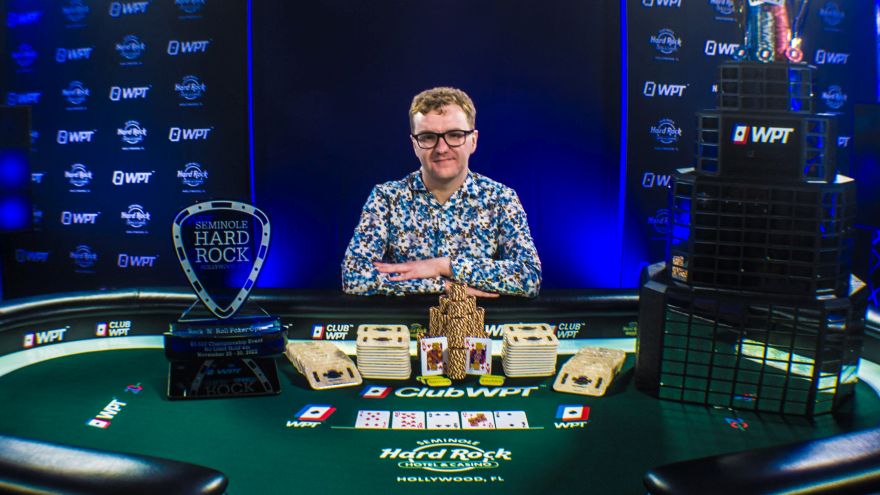 The $3,500 buy-In created a $4,931,200 prize pool, more than doubling the $2 million guarantee. Payouts went to 193 finishers, each one of them aiming for big prize money as well as a $10,400 seat to the upcoming WPT World Championship that was reserved for the winner.

Wilson will be taking that seat at the Wynn Las Vegas on Dec. 12, looking to add even more to his live tournament earnings of $1,405,871. The Bolton, England native has more than a week to savor his first major title that came against a tough final table that included former WPT champions.

Both Eveslage and Altman have multiple WPT titles on their resumes. Eveslage's most recent was less than two months ago at the WPT Five Diamond World Poker Classic for $1,042,300. Altman last tasted WPT victory at the Seminole Hard Rock Tampa 18 months ago for $613,225.

First to exit the final table was Robel Andemichael, his A-4 beaten by Wilson's A-Q. Gediminas Uselis was dismissed by Wilson not long after, his four-bet shove with A-10 failing to connect versus the champ's pocket kings.

Altman's bid for his fourth WPT main event victory was snubbed by Joshua Kay when his king-high straight fell short to the ace-high straight of Kay. Eveslage had to settle for third place, running into Wilson's pocket bullets while holding a pocket pair of his own, J-J.

That left Wilson and Kay to battle for the title, which turned into a see-saw affair despite a huge lead by Wilson at the start of heads-up play. Kay, who has made a handful of WPT final tables, doubled up twice and sniffed out a Wilson bluff to gain the lead.

That lead wouldn't last, however, as Wilson's transition from online pro to live champ was in the cards. Less than two dozen hands later, his pocket kings held up versus the 8-7 offsuit of Kay on a 10-7-4-Q-2 board.