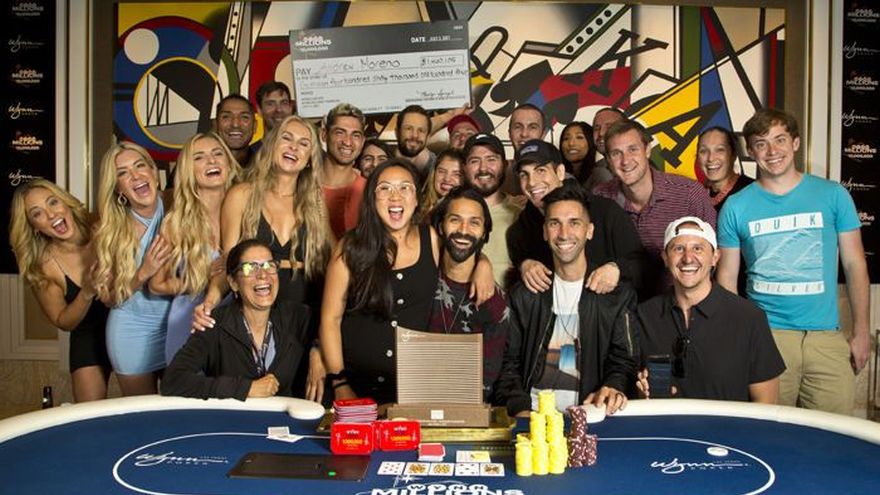 The event had a monster $10million guarantee but still smashed that figure when 1,328 entries rolled in, the final prizepool topping out at $12,483,200.

Among the 134 who cashed were luminaries of the game such as Ryan Riess, John Hennigan, Kathy Liebert, Daniel Negreanu, Jason Koon, Alex Foxen and Kirsty Bicknell, though none of these stars made the top 50.

By the time day 6 arrived, the field had been whittled down to the final table of nine, all of whom were guaranteed $200k for making it this far, and it would take another 11 hours to separate them.

Moreno had an early sweat all-in against Maguire but his kings held up and it was Lion Yiming Lee who became the first casualty of the day, losing a race to Julian Milliard-Feral.

Joe Kuether and then Jaime Cervantes followed Lee to the rail in 8th and 7th respectively, the latter witnessing a horror flop...

Lewis also despatched Philip Shing and Milliard-Feral and that left just four, the prizemoney now sitting at more than $600k and rising. Salim Admon’s hopes of Wynn glory ended at the hands of Moreno...

English pro Toby Lewis would miss out on the extra cash when a river king sent him crashing out, his pocket 3s not quite holding up against Maguire’s big slick.

That left us heads-up and there was more drama to come, the final hand producing a flop worthy of a grand finale with Maguire hoping this time for his big slick to hold against a big flush draw...

...but it was the 2-outer that arrived to seal victory for Moreno...

Moreno lifted the trophy and $1,460,106 and he’ll soon have something else to celebrate, with a first child expected soon with his Pokernews host wife, Kristy Arnett .

“I’m grateful above all else,” Moreno told reporters afterwards, revealing he would be “playing up until and through the WSOP until my son is born and then I’m taking a nice long break.”

Moreno added: “This is what I will always remember. I’m just happy to have all these people here with me.”

*After a three-way deal.