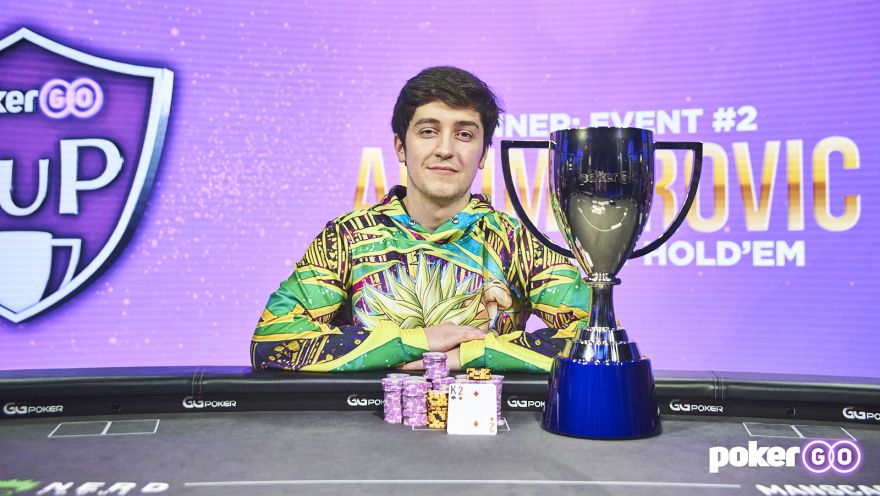 Ali Imsirovic has scooped the second of eight PokerGO Cup tournaments, bagging the $183,200 first-place prize and claiming the victory is mainly down to his “work ethic and studying”...

The young Bosnian pro was among 61 entries to the $10k buy-in event, looking to add another title to his impressive list that includes Poker Masters and U.S. Poker Open trophies.

By the end of day one, he had bagged the chip lead among the remaining six at the final table, with Sergio Aido having earlier fallen on the money bubble in 10th spot.

The remaining sextet were assured of a $36,000 cash, with Jason Koon and Frank Funaro most in trouble as the shortest stacks. First to fall, however, was Lithuania’s Matas Cimbolas, running his ace-five into Imsirovic’s big slick, a five on the flop negated by a river king.

Funaro soon followed, also at the hands of the young Bosnian star, and then Mo Rahim was busted by Dylan Linde, having been hit hard by Koon on a comeback, the Team partypoker and Triton series ambassador tripling up in the 3-way all-in...

Three-handed play lasted a while, but eventually a big showdown saw Linde fall in 3rd, running his queens into the kings of Imsirovic, the board of no help but an $85,400 cash softening the blow somewhat.

Heads-up lasted all of one hand, Koon trapping with ace-nine and getting lucky when Imsirovic shoved his king-deuce, but then the flop paring the deuce to send Koon out in second for $122,000.

Afterwards Imsirovic explained to PokerGo reporters how he manages to show his best at the big events and series: “I suppose it’s just the work ethic and studying. The more I study, the more confident I feel when I play."

He added: “Usually when there is a big series going on, before I’m just spending all of my time working on my game so when I show up I feel very confident and try and play my best. It doesn’t always happen, but I typically feel way more confident when that happens and better results usually come out of it.”

Imsirovic also leapfrogs to the top of the PokerGO Cup series leaderboard with two of the eight tournaments completed.