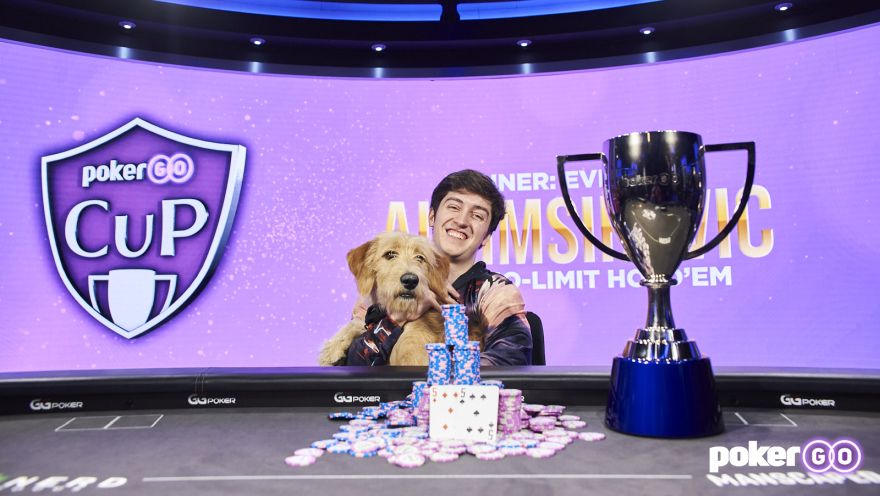 Cometh the big series, cometh the big names of the game and they don’t come much bigger than Ali Imsirovic, the young Bosnian phenom bagging his second title in four events at the PokerGO Cup, yesterday’s victory worth $240,000!

When he scooped the $10k buy-in event 2 for $183,000 just a couple of days ago, he put his success down to his “work ethic and studying. The more I study, the more confident I feel when I play."

Yesterday he was back at another final table, bringing the chip lead into the final six of event 4, a $15k buy-in NLHE tournament that attracted exactly 50 entries. That meant $750k in the prizepool and almost a third of that sitting up top.

David Coleman was first to exit when he ran his shortening stack into Daniel Weinand’s pocket aces...

With the blinds rising, Mo Rahim was next to put his tournament life at risk and Alex Foxen was the man who took it, winning a race when his ace-seven found another seven on the river to send Rahim to the rail in 5th spot.

Foxen himself would depart in 4th when he ran pocket eights into Imsirovic’s jacks and then the Bosnian did it again, this time coming from behind to topple Cristos in 3rd.

Heads-up now and Daniel Weinand did his best to close the chip gap but ultimately it was a fruitless chase, the final hand seeing him with an open-ended straight draw against Imsirovic’s flopped set, the river bricking and Daniel settling for 2nd place and $157,500.

For Imsirovic it was win number two and as he told PokerGO reporters afterwards, with an accompanying laugh and smile: “You just have to hit a few sets and it works out!”

He explained his thinking behind the strong work ethic he described a few days previously: “This is what I want most in poker, to win these high roller-type series against really tough competition.”

Imsirovic added. “You have to do well over a bunch of tournaments and there’s a lot of variance so obviously you’ve got to run good, but these kinds of series feel way more prestigious than anything else I could really win. So that means the most of anything in poker to me.”

He now has a big lead in the overall PokerGO leaderboard standings, though there are still four more events to go, the first of two $25k tournaments having reached a stacked final table to be played out today, with Daniel Negreanu still in the mix.