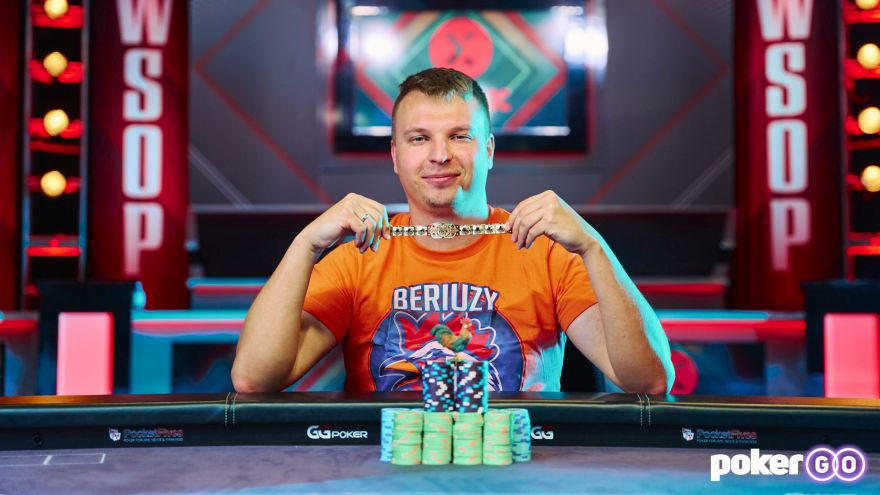 There were 62 entries to what was planned as a 3-day event, the $5,998,500 prizepool paying out the top 10 finishers, and as expected it was a who’s who of highstakes poker’s “finest” who took to the felt.

Day two dawned and Justin Bonomo made a brief appearance, while Jason Koon, among the overnight chip leaders, made his exit at the hands of Phil Ivey...

It was 2021 WSOP Main Event champ, Koray Aldemir, who bubbled the money, getting his final 2 bigs in with 7♣ 6♣ and seeing a pair in the window, but Ponakovs rivered a pair of aces to send Aldemir off penniless.

The money was already getting serious when Belarus’ crusher Mikita Badziakouski fell in 7th spot for just over $¼million, while Talal “raidalot” Shakerchi’s departure in 6th was a brutal tale of aces cracked by quads...

Michael Moncek was living the dream, having bagged a bracelet earlier in the series and now final tabling against the game’s elite, and he’d have to be happy with his 5th spot and lifetime best score of $420,944.

Hedge fund manager Gregory Jensen was another who was playing in exalted poker company and his well-deserved 4th spot and $571,896 comprises the vast majority of his Hendon Mob listing.

England’s Ben Heath had to settle for third after his last 10 BBs went in and Ivey turned a pair of queens, leaving the legend heads-up and looking for his 11th WSOP gold bracelet.

It wasn’t to be, however, as the final hand played out, Ivey 3-betting...

...pairing Ponakovs’ nine and giving Ivey the up and down straight, the latter raising all-in and eventually seeing a call...

...and that’s all she wrote, Ponakovs victorious and Ivey having to wait for bracelet number 11.

Ponakovs said afterwards: “I’m really pleased to finally get the bracelet. There is for sure some good stuff happening right now in my head. I will realize later ...I am getting better and better in life. I am coming for more events.”