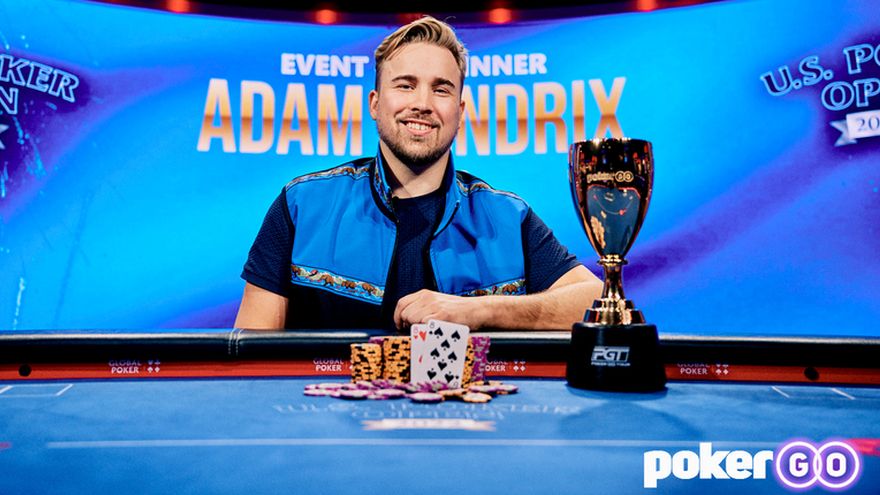 Adam Hendrix proved himself to be the Alaskan Assassin at the US Poker Open, taking down event 3 and a $211,200 payday that vaults him into 2nd spot in the overall leaderboard race...

The 12-tournament series being held in the PokerGO Studios at the Aria in Vegas has been well-attended so far, and yesterday’s $10k buy-in NLHE was no exception. Fifty-nine players produced 88 entries, the $880,000 prizepool to be split among the top 13 finishers.

As usual it was a who’s who of highstakes poker mingled in with new names to the highroller ranks and wealthy amateurs mixed in. Early casualties included Anatoly Filatov and Stephen Chidwick, while Phil Hellmuth’s late reg proved to be a short-lived affair.

Meanwhile, Daniel Negreanu fell by the wayside, as did Joe McKeehen and Chris Brewer, while Kristina Holst’s hopes of being the first female to cash were dashed when she became the money-bubble victim...

By the time day 1 came to an end, only six players remained, with Jonathan Little holding the chip lead, and Shannon Shorr looking for his second title win of the week.

First to fall was Nitis Udornpim, successfully dipping his toes into the highstakes water, and he was followed to the rail by Erik Seidel, whose toes have been steeped in the highroller waters of Vegas for three decades.

Shannon Shorr’s double title hopes were dashed when he fell to PokerGO Cup winner Jeremy Ausmus’ pocket 10s, leaving the podium spots filled. Separating the remaining trio, however, would take a long time, but eventually Ausmus ran out of luck, leaving Little and Hendrix to vie for top honours...

It didn’t take long for the heads-up battle to reach its climax, three hands in and Little shoving, with Hendrix insta-calling...

That gave Alaska’s winningest tournament player the victory and $211,200 top prize, with enough leaderboard points to launch him into 2nd spot behind Shannon Shorr.