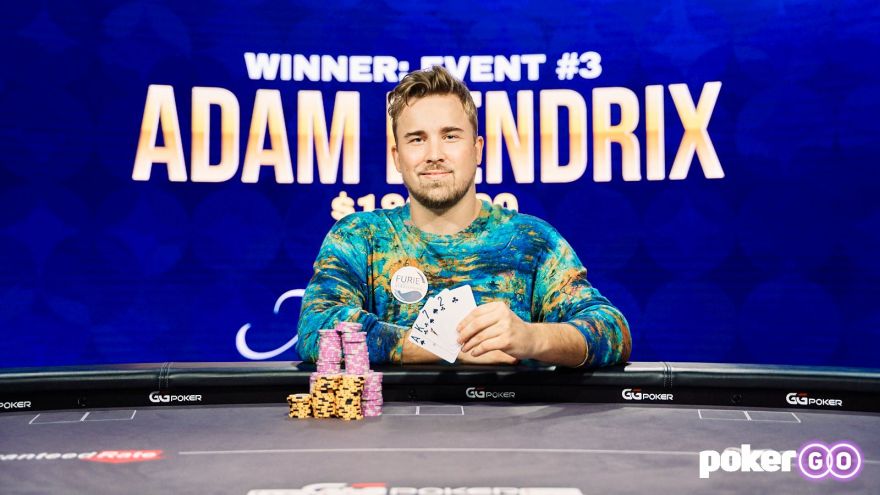 Adam Hendrix took the first of the PLO events at the 2021 Poker Masters series in Las Vegas this weekend, scooping the $186,300 top prize for his first notable career victory...

The original 69 entries to the $10k buy-in event had been cut down to just six by the end of day one, John O’Riordan in 10th place bagging his third cash in three events and Erik Seidel taking 7th spot, though both fell short of the final table.

The six players who returned for day two and the final table included highroller experts Jake Daniels and Jake Schindler, with Chris Brewer, Brent Roberts and Matthew Wantman rounding out the half dozen chasing Poker Masters leaderboard points as well as the money.

Brewer was the first to fall, Hendrix the executioner, and then it was Schindler’s turn to hit the rail, picking up $55,200 in 5th place to add to his 4th place finish in event 3.

Hendrix then took out both Brent Roberts and Jake Daniels, leaving him heads-up against Wantman, and it turned out to be a marathon three-hour battle for the title.

The deciding hand eventually appeared, Wantman calling off a 3-bet shove on the flop, ahead and alive until the river appeared...

...and that was enough to give Hendrix the win, $186,300 and 3rd place in the overall Purple Jacket leaderboard standings.

“I feel good,” Hendrix told PokerGO reporters afterwards, revealing: “I’ve had a bunch of seconds in my career and not any real first places that are notable, and grinding through that is just icing on the cake to win it. I’m amazed right now. I’m very happy.”