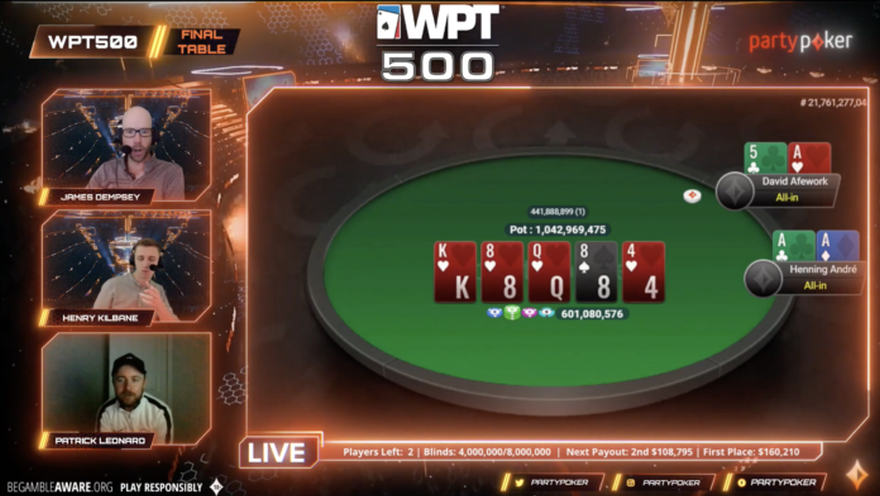 David Afework has been disqualified from the WPT500 after partypoker accused him of account sharing. The Brit had just won the major event for a career best $160,210 and has now lost both his account and any funds that were in there.

Afework quickly took to the 2+2 poker forums, posting as Devplaza, to air his grievance over what he claims is a mistake. He explains how he received an email from the partypoker security team saying he has been disqualified for lending his account to a third party.

“Hi, my name is David Afework and I recently won $160 000 on Party poker. It was my biggest win ever and the most amazing moment of my life. However today I received an email from party poker telling me that I have been disqualified because they believe I gave my account to a third party. Which is just complete rubbish.”

He continues by clarifying that he played the entire event on his own Dell laptop and was alone for 99% of the time he was playing.

We also learn that Afework shares an apartment with another poker player and this is assumed to be a possible cause for the accusations. We don’t, however, find out who this mystery player is.

“I imagine this third party nonsense comes from the fact that I have been living with another poker player for the best part of 7 months so maybe they see we share the same ip address or whatever but I'm completely transparent about that and don't want to hide that, no one has ever had access to my account other than myself, that's a 100% guarantee.”


Could it Be a Mistake?

The young man must be absolutely devastated over what is happening right now. From the peak of his career to losing all that money, and we assume having his account banned on one of the major platforms for tournament players.

In a further kick in the teeth, Afework tells how in his post-win elation he stuck $2,000 on the roulette wheel, ramping it up to $18,000, which has all been confiscated too.

Although posters on the 2+2 poker forums were skeptical, to say the least, Afework informed them that he has contacted the UK Gambling Commission to see what recourse he has.

An inquiry by PokerNews for some clarification got the following reply:

“We have a dedicated Game Integrity team who use a variety of detection methods to proactively identify accounts that are in breach of our terms and conditions. ‘Real Name’ tables help provide a community feel while reducing anonymity. A real account holder should never give a third party access to their account, as stated in our General Terms and Conditions (Section 12).”

Only Afework knows himself if he’s being honest, but either way it must be worrying that online poker platforms never come unstuck in court defending themselves against legal action. Do we even know a single player who lost their account and funds and won a court case?

It was pointed out by one poster that following big wins players are likely to have their account audited, meaning we don’t know for sure when the breach of terms of service took place.

While nobody wants to see this kind of thing in poker, one man who will benefit tremendously is Twitch streamer Jaime Staples. The Canadian also picked up his career best score of $74,227 last week and will now be collecting almost another $35,000.

Sweden’s Henning André was robbed of feeling that euphoria of winning while still sitting at the table, but he will no doubt be more than happy to pick up another $51,000 that he wasn’t expecting.