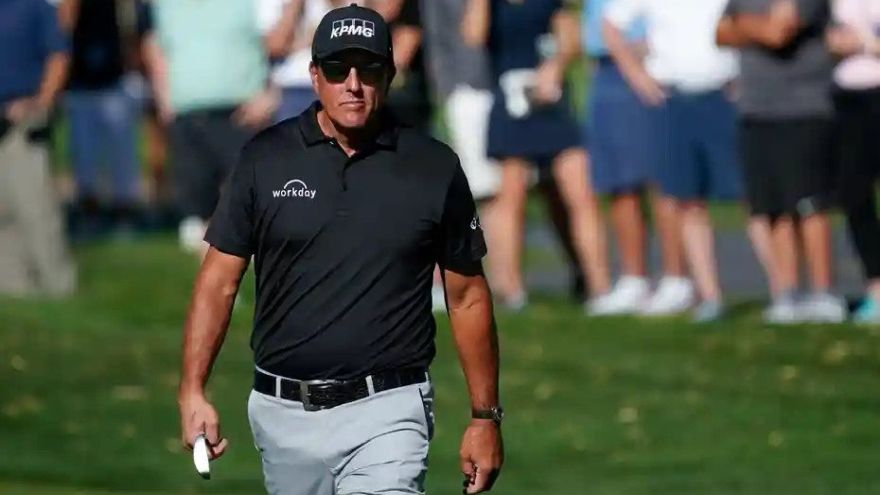 A soon-to-be-released biography on golfer Phil Mickelson will reveal the shellshock claim that the 6-time Major championship winner blew more than $40million on gambling in a 4-year losing spree...

This is the second (and last) excerpt from the book. I wanted to try to capture the totality of Phil…and “Phil.” He is a complicated person. This has been a complex process. I can’t wait for 5/17, when y’all can read the whole thing. https://t.co/L0lNSQsnpX

Alan Shipnuck’s book has the less-than-catchy title: ‘Phil: The Rip-Roaring (and Unauthorized!) Biography of Golf’s Most Colorful Superstar,’ but its contents are likely to see Mickelson hit the headlines, the legendary golfer at one point apparently unable to pay his caddy.

Shipnuck writes: “According to a source with direct access to the documents, Mickelson had gambling losses totalling more than $40 million in the four-year period (2010–14) that was scrutinized.

He adds that Mickelson’s income in those “prime earning years” were estimated at $40million per year – “an obscene amount of money...”

After taxes, however, that figure would be halved and Shipnuck details some of Mickelson’s running costs.

“Then he had to cover his plane and mansion(s), plus his agent, caddie, pilots, chef, personal trainer, swing coaches and sundry others. Throw in all the other expenses of a big life—like an actual T. Rex skull for a birthday present—and that leaves, what, $10 million?”

That $10million is the magic figure, says Shipnuck.

“Per the government audit, that’s roughly how much Mickelson averaged in annual gambling losses. (And we don’t know what we don’t know.) In other words, it’s quite possible he was barely breaking even, or maybe even in the red...”

Mickelson’s gambling is not a new story, the man with 45 PGA tournament victories to his name embroiled in the infamous Billy Walters sports-betting trial.

Mickelson was named 122 times at Walters’ trial on charges of insider trading, the sportsbettor sentenced to five years and later pardoned by Donald Trump.

Walters was furious at Mickelson, who he claimed owed him $2million, for not speaking out in his defence.

“My god, in the meantime a man’s life is on the line,” Walters said of Mickelson’s decision to plead the 5th Amendment and stay silent, the golfer paying back the $1million he made in the insider trading deal that netted $43million in total.

The investigation into Walters shone light on Mickelson’s own finances, with the $40million partly lost by betting on college basketball games.

The sports journalist author of the book writes: “It is important to note that Mickelson never opens his mouth without an agenda. He has spent his career alternately charming, cajoling, manipulating and bullying reporters.”

He notes an occasion when his colleague, John Hawkins, was alone with Phil in a locker-room. Phil reportedly “pulled out his phone and began placing bets on early-season college basketball games. ‘Over 20 minutes he must’ve made 50 bets,’ says Hawkins. It was like he was showing off.”

Hawkins never wrote about the incident, partly due to his own wife’s professional situation with one of Mickelson’s sponsors with his clothing deal.


“I’ve wondered about Phil’s motivation in being so brazen in front of me,” Hawkins says. “Was he trying to co-opt me? Was he testing my loyalty?”