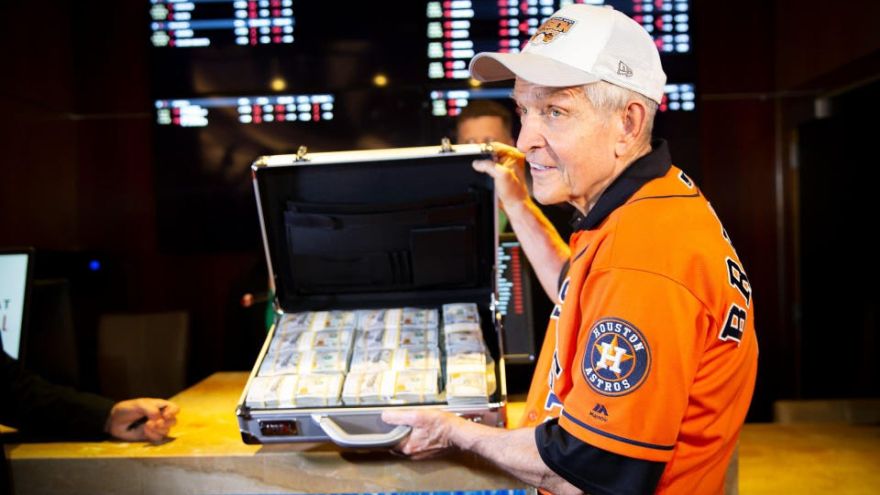 McIngvale is notorious for his massive bets on sporting events, and for the deal he offers customers that funds his gambling, picking up almost $3.5million from last year’s NFL Superbowl for example, but this week’s win dwarfed his previous winning payouts

Back in May, the Houston furniture store mogul placed $3million on the Astros at 10-1 to win the World Series on Caesars Sportsbook's mobile app.

That cost the sportsbook giants the biggest payday they’ve ever lost, with chief operating officer for Caesars Digital, Ken Fuchs, stating in a company press release: “What can we say? We just wrote the biggest check in sports betting history to Mattress Mack for $30,000,000.”

Caesars weren’t the only bookmakers to feel the pain when the Astros won game 6 to book a 4-2 victory in the flagship MLB event of the season.

71-year-old Gallery Furniture boss McIngvale had laid out another $7million in bets with other bookmakers, getting average odds of +750 (15/2) on the Astros.

UK bookmakers Betfred, who only recently opened up shop in the US market, were stung for a cool $5million after offering McIngvale odds of 5-1 on his $1million bet.

Betfred U.S. chief operating officer Bryan Bennett said the bet was “significantly larger” than any other the US arm of Betfred had taken, while Fred Done, veteran owner of Betfred in the UK, congratulated McIngvale on his win.

“I want to congratulate all you people in Texas, all you Houston Astros fans, and especially you, Mattress Mack,” said Done in a video release.

“You had the guts to put your money on the line. You put $1 million dollars on the Astros with me at five-to-one. They won. You deserve your money, and I'm paying you.”

A big chunk of the $75million will be going to McInvgale’s furniture store customers, his legendary company promotions promising customers double their money back if they spend $3,000 or more and his bets come in.

In 2017 ‘Mattress Mack’, as the locals know him, ended up refunding $10 million after winning $13 million betting on his beloved Houston Astros to beat the Los Angeles Dodgers.

The same is likely to happen this time around, but for McIngvale it’s all part of the fun.

“Oh, it's definitely a win-win,” McIngvale told ESPN recently. “These promotions just bring the brand to life and give us a ton of brand equity that we wouldn't have otherwise. The customers love it, so they're totally engaged and talk about it for years.

He added: “Because it runs all season long, it probably ups the number of people following the Astros, too, because now they have a real vested interest in the team.”